My mental health journey across the Channel 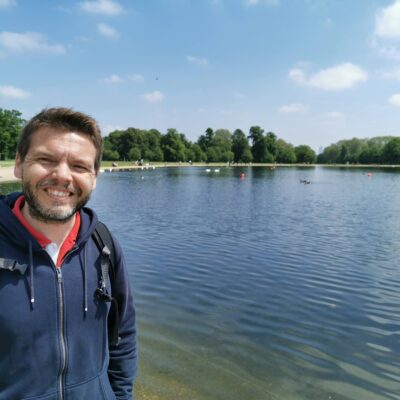 A message from Fabien – I wrote this before the Ukraine invasion, and while my experience was in no way as shocking and dramatic as what millions of people are going through right now, it is related through the sense of hope that came with it – and hopefully can serve as a reminder to act with empathy and compassion to those coming over here with the same hope.

According to the ONS, as of June 2021, over nine million people resident in the UK were registered with a birth location in another country. This means a significant chance that, at work, you may be surrounded by people who, like me, left their home country one day to start a new life in the UK. Behind their charming accent, you are likely to find, aside from memories of a different cuisine, or a foreign culture, stories of hope for new beginnings, and overcoming challenges of adjustment, and acceptance.

I spiralled into particularly dark times

My own story begins shortly after graduating with my Masters in Human Resources in France, back in 2004. Having left the education system​Graduate mental wellbeing in the workplace PDF Starting your first 'proper job' out of university can be a challenging time. This guide explores where new graduates struggle the most and what employers can do to help.Free By: Student Minds View resource and the ongoing intellectual challenge, enrichment, and structure it provided, I took a job which I had led myself to believe I was interested in, for fear of being unemployed. All of this left me somewhat lost, with a big question mark over my future and sense of direction​Purpose PDF This guide can help you and you colleagues discover your purpose, and ensure you are working towards it every day.Free By: Unilever View resource. Prone to challenges with my mental health, and recurrent symptoms of what I know now to be depression, I spiralled into particularly dark times, with little control over my negative thoughts, which were gradually taking over.

A lucky moment of clear thinking allowed me to lift myself up from this dark place, and decide on the spur of the moment to leave this job, leave my flat, and remove anything tying me down, to make myself completely free to start afresh anywhere. After a few weeks sleeping on my brother’s sofa in Paris and exploring different options, I secured a job with a large company in Newcastle-upon-Tyne, a place I had only spent a few hours in for my interview. I hopped on a low-cost flight with a backpack to move in a shared house with people I had never met!

I found myself absolutely exhausted at the end of every day

Such dramatic and rapid change obviously got my head spinning, and triggered a certain degree of stress, adding to the challenges which naturally come with starting and learning a new job. Working and living in an English-speaking environment, in full immersion, used up a lot of energy. The people around me were extremely warm and welcoming, and therefore I had a good rhythm of social interactions, which I couldn’t complain about.

For the first six months, I found myself absolutely exhausted​Emotional energy PDF This PDF guide from Unilever explains what emotional energy is, and how it interacts with your wellbeing.Free By: Unilever View resource at the end of every day, while those around me remained unaware of this extra strain on my levels of energy – not that I would have expected them to know. With all that said, this change provided me with a new sense of perspective and outlook towards the future, which had a positive impact on my mental health.

Overtime, I also discovered another, more unexpected benefit, of speaking a different language. Back in France, for various reasons and ‘baggage’, I would have found it difficult to open up about certain personal issues​Approaching a sensitive conversation around mental ill health PDF Every conversation a manager has with a colleague who may be experiencing mental ill health will be different. This PDF guide from Acas has tips for managers to think about when approaching such a conversation.Free By: Acas View resource. I simply felt myself unable to express certain things or use certain words, in relation to my own feelings and emotions. Speaking English had a liberating effect on me, removing the weight of some words, and I suddenly found it much easier to open up – probably too much so at times!

This meant for example that I became comfortable coming out as gay​Ten ways to support LGBT employees Web page Glassdoor have written a short article featuring 10 simple steps you can take to ensure your LGBTQI+ colleagues are included and represented at work.Free By: Glassdoor View resource to new people I met, including in the working environment. I could also speak up more about my feelings, even though it would take a few more years for me to openly talk about my mental health challenges, as the associated stigma, unfortunately, had crossed the Channel with me.

I remained an 'other' in the eyes of many

This newfound sense of identity, effectively my ‘British-self’, could not however mask the fact that I remained an ‘other’ in the eyes of many. In the first few years, this could manifest itself by being left out of jokes or discussions referring to specific parts of British culture or personalities, without being acknowledged. Later on, once I had caught up with a good deal of British culture, it would become more subtle, more implicit, just hints that people assumed I wouldn’t understand certain things, or a slight discomfort in the way they interacted with me (although whether this had to do with me being French, or gay, or just me is something I’ll never know!).

For people in my situation, such behaviours, which I have heard aptly referred to as ‘subtle acts of exclusion’ would have a double effect: one which is about the perceived lack of inclusion in itself, and the second which knocks down, for just a moment, efforts made through the years to feel accepted, which can make you not only feel isolated, but only re-evaluate this new life of yours.

At this stage, I must also say that I have been lucky, throughout my UK career, to have a great deal of wonderful colleagues who were going out of there way to make me feel included, and find the right way to see my different background as a richness, a contribution to the group, without needing to draw attention to it. As for other minority groups, this sort of allyship​10 steps to non-optical allyship Web page This Instagram guide, created by Mireille C Harper, explores ten ways for White people to be allies to their Black colleagues when it comes to improving the workplace and society as a whole.Free By: Mireille C Harper View resource is the best support someone can give to avoid feelings of exclusion and loneliness which can lead to, or exacerbate, mental health challenges. It comes back to seeing every single individual for the rich blend of lived experiences, hopes and emotions they bring with them.

Sometimes we say we’re fine when we’re not. This page includes promotional materials to encourage staff to ask twice.

The words we choose to use matter. This guide, from Healthline, covers a range of sensitive topics and discusses how to talk about them in a way which is empathetic, honest and inclusive.